How to Play Big Pots

Unlike Limit Hold’em, in NL Texas Hold’em sometimes you can find the pots getting quite big. Hence, it is essential as a poker player to know when to build a pot up, when to play in a big pot and when to fold.

When Large Pots Can Help You

A large pot is great when you have a very strong hand and wish to win as much as you possibly can, milking the hand for all it is worth. It can also be handy when you are trying to bluff the other players or when you’re trying to stop people from calling on a draw. 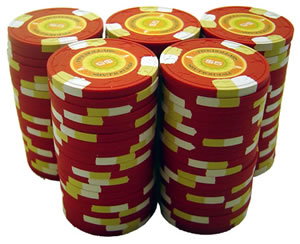 When you have a hand that you are sure is a winning hand then a large pot will allow you to bet big on the river.

It’s a lot easier to make someone call a draw and have bad odds with a large pot. For example if there is $80 in the pot and you raise it another $80 it is highly unlikely that anybody would call on a flush or straight draw. However if that same pot was $600 and you raised it $300 with one card left on the board it puts them in a much more difficult position making it very hard for them to fold.

It’s a lot better and easier to make a big bluff on a large pot, for example bluffing $300 into a $40 pot is just stupid and worse may not scare anyone away. However if there is $300 in the pot already than you may be able to scare away someone with another $300 bet and win a large sum.