Whether you call them microstakes or microlimits, one thing is clear; a lot of newbies start here. And that’s okay. We love the idea of newbies starting with the lowest of limits because this is where you will build most of your strategy. This is where you’re going to have the time of your life. You’ll meet new poker players. You’ll decide in the microstakes whether or not you want to move up. As much as we love poker online, we realize that not everyone is suited for it. Microstakes let you figure that out in a quick hurry.

For the purpose of this article, micro-stakes refers to 1c/2c and 25c/50c limits. Really, everything under $1 can be referred to as micro-stakes.

Your poker image matters. We use image in order to scare opponents out of pots, and to otherwise think twice before trying to bluff us. You’re going to find that micro-stakes players tend to play pretty badly. You can’t escape bad poker play, no matter how much you try. Some people just don’t care that much.

Cultivate the image of someone that plays carefully. It’s okay to go tight and play only a few premium hands. You will also find that players around you tend to only go in big when they really have something. You’ll also find calling stations. Cultivating your image is one thing, but you’ll also need to look at the image that others have built — even if they don’t realize that it’s something that they’ve built. The more work that you put in, the more profit that you’re going to get long term. We keep repeating this, but poker is a long term game. It just is — you can’t get lost in hand to hand. 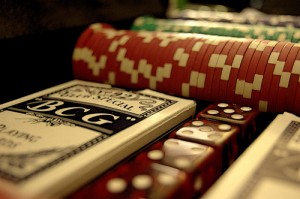 As a side note, you want to make sure that you keep your calm. Some players will make you mad, and it’s tempting to snap back at them. This shows that you don’t have any type of self control as a poker player. That’s not a good thing to try to display to people. You want to show that you’re cool, calm, and in control. You want to show that there’s no reason to mess with you — you’re tough. If you can’t do that, you need to take a break until you can do it. Letting random people get you mad online isn’t good for your blood pressure anyway.

Playing a lot of micro-stakes is the key to understanding them. You can’t do that in 10 hands, 20 hands, or even 50 hands. You need thousands of hands in order to study data. That’s just the way it is. You want to play your best game of poker, and that means that you have to have an understanding of how everything ties together. You’ll be modifying your strategy quite a bit as time goes by, so don’t think that your strategy has to be set in stone. You’re going to be playing to get a better understanding of the players around you. You’ll also find that they aren’t as serious as you, but that’s okay. You can use that to your advantage in some pretty big ways.

The Value of Data

Crunch the numbers. You want long term profitability, not just short term wins. You’re going to be tempted to chase with the chasers, but that’s not a good idea. Yes, they will get lucky. That’s something that you’re going to get upset about more than once, and that’s okay. But you have to know that they’re going to get lucky. They’re going to make plays that you would have never imagined they’d make, and it’s going to make you mad. You might even want to correct them. Don’t. They will not take it well, and you’ll mess up your own game. Take their money instead. We promise that it’ll make you feel better.

When it comes to data like implied odds, you might think that the other players at the table know about this. We promise you that they really don’t have much of a clue about this sort of thing. Players that hang around these stakes often that aren’t real serious about poker aren’t digging in that deep. They want to press a few buttons, see the cards flip, and call it a day. They’re just escaping from work or another time block that’s got them stressed out. Not everyone strives to become a career poker player. You have to know who you’re dealing with.
The Road Ahead

It’s important to make sure that you stay at the microlimits stage until you’re actually profitable. We’re not talking about just a few games here or there. You need to look at thousands and thousands of hands to see how profitable you really are. Getting good poker data is a must. You cannot just “wing it” and hope to survive the higher levels. There are players that’ll eat you alive within a few short hands if you’re not careful. Sure, you might get lucky but poker is about long term play. You want to not just hold onto the bankroll money you bring with you — you want it to grow with time. This is like baking good bread. An aged starter is a great path to good bread. However, starting over and over with fresh starter leads to bread that just isn’t as good. It’s all in the details. You can take your bankroll and watch it grow — which is something that everyone looks forward to. On the other hand, you might want to just take breaks and play only when you’re in the mood. That’s okay too.

Overall, micro-stakes poker has its benefits and disadvantages. You’re not going to make money quickly but it’s probably to grind out a nice little side income over time. Some people do just that, and it hasn’t hurt them in the least bit. You don’t have to be a super high roller in the poker world to get noticed. You just have to show up and be consistent in order to start building a following. Good luck!