Look, poker is something that’s available to everyone — we’ve never shied away from talking about poker, loving poker, and getting other people to play poker with us. However, what you will find is that you need to ensure that you aren’t making the same classic newbie mistakes. We wanted to cover some more misconceptions, because newbie poker players deserve better. You don’t have to get taken for a wild ride as long as you’re willing to push forward to claim some good pots.

For example, let’s start out with the biggest one that gets splashed around: pocket aces. This means that you have AA. It’s a good hand. It’s a great hand. But you have to realize that it’s not a hand that wins every single time. A lot of people put so much stock in the cards that they don’t really think too much about the psychology of the game. You can’t just get sucked into the fact that you have a monster. Remember, if people start folding, then the pot is going to be lost. Make sure that you raise and re-raise before the flop even comes down. This lets people know that you’re aggressive and you might have something. 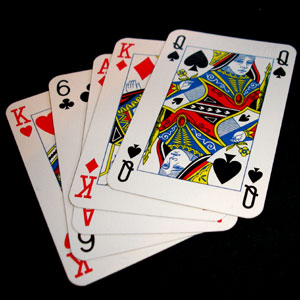 Now then, when the flop comes down and you study it, pay attention to what you see. You could end up being pushed out even with pocket aces, which isn’t a good idea at all. You will want to make sure that you can think about the road ahead of you — it’s all about winning pots. If you can’t win the pot, then you need to bail. Yes, even if you have a monster. This is even more important when it comes to tournament play, because you don’t want to end up losing your chips. Getting pushed out of the money is never a great idea.

These tips also cover the AK hand — one that gets played a lot just because it’s got such a high value. The truth is that any hand can be beaten, which is why poker captures so much attention. If you don’t get anything on the board that connects, your AK hand isn’t as good as you think it is.

For example, if the board comes down J-10-8-5-2, all rainbow (mixed suits), and you don’t get a flush out of it, it’s not the hand that you should have been in. There’s always time to think about staying alive vs. just winning one pot at the moment.

This is important to consider, especially when you’re really trying to get things off the ground. There’s nothing that says that you have to play each and every hand. This is a newbie mistake that should be corrected a soon as you utterly can.

It’s hard to write a guide about which hands win over which hands, because it’s all relative. The flop can be a cruel mistress to any hand. What ultimately makes poker players successful is what they do with their hands. How successful they can honestly be through all seasons. This is about consistency, which is something that new players really don’t think about.

You’re going to be playing a lot of poker in order to win big money like the people that you see on TV. In fact, you might want to get it out of your head that you need to make big money. Study strategy instead. Avoid gimmicks. Work very hard to get poker to a point where you’re really successful, and the rest will fall into place. Good luck!

Here’s a Good Way to Navigate an Online Poker Tournament