The Hitman slots game is inspired by the successful video stealth game series, which in turn provided the inspiration for a 2007 action movie. The game was created by Microgaming and can be found on many online casino sites. The game allows the player to take on the role of Agent 47, the assassin lead character of the video game series, and requires you to kill a number of targets.

At an initial glance at least, the Hitman slots game is not that different to a lot of other online slots, with five reels and fifteen paylines – both of which are quite standard for this type of game. The game allows you to bet a maximum of 20 coins for every payline, and the house edge for the Hitman slots game is considered to be around 4.16 percent. Aside from these basic features however, the Hitman slots game also features a number of interesting bonus options for those considering playing it, that are worth looking at. 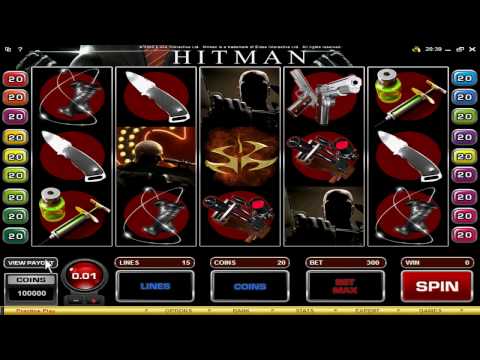 The first bonus feature is triggered when the player scores a minimum of three of the ‘Insignia’ symbols on the first, second or third reels; the player is then given the option of choosing any of the Insignias – with each one providing a prize of different value. The second bonus feature incorporated into this game is activated by scoring a minimum of three ’18 age certificate’ symbols on the third, fourth or fifth reels, and entitles the player to eighteen free spins with a two-time multiplier.

The final bonus feature involves the player having to choose one of a number of potential ‘hits’ to kill, with the value of the prize they can win depending on the difficulty level of the target they choose. This feature becomes activated when the player scores a minimum of three of the ‘Laptop’ symbols on the third, fourth or fifth reels.